Dr. No’s SORCIÈRE Collection of a special limited collectors edition. DYBBUK and NecroFuzzicon exclusively available here at www.drno-effects.com
Only 666 copies will be made in total (222 copies of each SORCIÈRE part.

This comes with a limited Edition SORCIÈRE T-shirt, during the order proces you can fill in your t-shirt size.

Only 1 left in stock

Dr. No’s SORCIÈRE Collection of a special limited collectors edition. DYBBUK and NecroFuzzicon exclusively available here at www.drno-effects.com
Only 666 copies will be made in total (222 copies of each SORCIÈRE part)

These last four years at the Dr.No laboratory were dominated by the Occult, Sorcery and Myths, three themes from which Dr.No drew the inspiration to develop his SORCIÈRE project.

A plan emerged, to create a triptych of sorts, consisting of three effects, based, both conceptually and tone-wise, on the topics mentioned above.

Dr.No’s approach usually tends to turn into obsession, and in this particular case, the obsession became even deeper and more extensive than before. As with every new project, Dr.No will transform his surroundings as well as himself, in order to delve into, and get into every fiber of the subject matter, thus reaching the best and most thought-through concept possible.

In 2019, the first part of the SORCIÈRE trilogy emerged: the NECROFUZZICON, a lethal FUZZ, shaped like a book, inspired by the NECRONOMICON, or Book of the Dead.

Soon after that, and in cooperation with friend and fellow magician Alain Johannes, the DJINN was released. Enriching boost and tone of every instrument it comes in touch with, and bringing out unknown tonal qualities, that up until then, had remained undetectable. 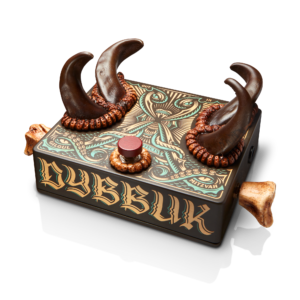 The story of the DYBBUK.

Most interesting to Dr.No with the DYBBUK project, was the occult element. The realm of the occult, where everything is upside down, and hidden meanings don’t always present themselves. ‘Occult’ knowledge, of course meaning ‘hidden’ knowledge; not to be detected by the untrained eye or ear.

As always, and as with each and every new endeavour, Dr.No aims to push things even further than with the previous one, making it better and smarter, ensuring the best possible result.

So much reading had to be done, so many things to be understood, connected and integrated, it seemed like an almost impossible task. And that only covered the conceptual part of the DYBBUK process. Simultaneously, of course, the development of that what was to be the main focus in the end, the circuit of the LEGBA-VIBE took place.

At times Dr.No almost lost his way in the vast complexity of the project at hand, which took four years to complete, and saw more mistakes made than good things started. Yet he never gave up, and the Dr.’s crazy dedication even led him to relocate to the french countryside, and turn a 1662 building, with ‘vibe’ in abundance, into his home and workplace. And once installed there, he let the atmosphere and focus take over, and swallow him whole. What an adventure! 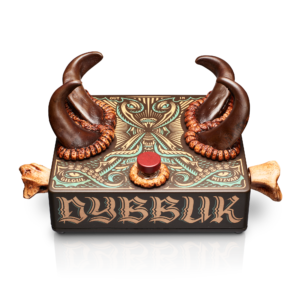 DYBBUK, “possessed by an evil spirit”.

The literal meaning and definition of the word ‘DYBBUK’, or ‘DIVOC’, is an evil, possessive spirit, believed to be the disrupted soul of a dead person. It would leave it’s host’s body or object once it completed it’s mission, or when expelled from a possessed person’s body, only to find another unwilling host. After all, for this spirit, there’s no place in Heaven or Hell.

DYBBUk first appeared in written text during the 16th century, originating from Jewish folklore, and myths dating back even longer.

Other forms of taking possession of a person’s body exist in Jewish mythology and folklore. Contrary to the DYBBUK, the IBBUR (meaning “fertilization”) is a positive possession, which occurs when a righteous soul temporarily possesses a person’s body. This always happens with consent, so that the soul can perform a ‘MITZVAH” (a commandment ordered by God, to be performed as a religious duty, of which there are 613). You will find the “MITZVAH” knob on the right side of the DYBBUK, which features a human Radius hand bone, to control the “MITZVAH” (intensity of the lightbulb).

The “GILGUL” knob  on the left side of the Dr. No Effects DYBBUK, (which also has a knob made of a bone of a human hand, but with the anatomical name “Ulna”, controlling the speed of the pulsing lightbulb), signifies a concept of reincarnation, in the kabbalistic esoteric mysticism.  In Hebrew the word GILGUL means “cycle” or “wheel”. Souls are seen to move through lifetimes or incarnations, attached to various human bodies over time. Which body they interact with, depends on their specific task in the physical world. GILGUL’s esoteric statements were articulated by 16th century Jewish mysticism, as part of the metaphysical purpose of creation. 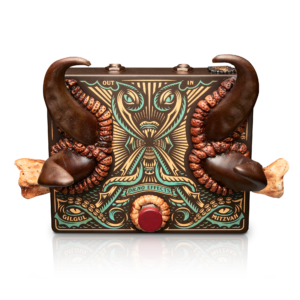 The Effect that the DYBBUK has taken possession of, is the “Legba Vibe”, developed by Dr.No, and named after Papa Legba. Papa Legba is the key figure at the crossroads of your life, when selling your soul to the devil. This transaction is said to bring you many advantages, but you must pay with your soul. The physical ritual and hallmark of Papa Legba is presented and depicted on the PCB (Printed Circuit Board) inside the DUBBUK.

The effect, although often associated with Chorus or Phaser, is in fact created by a staggered series of phasing filters, an optical circuitry that uses LDRs (Light Dependent Resistors), and an incandescent lamp in a light screen, as opposed to the usually aligned filters of a normal  phasing effect.

The Vibra-Chorus (later called Uni-Vibe) was known for its throbbing, hypnotic pulse, and atmospheric tone. It is widely believed that the Vibra-Chorus was intended to mimic the “Doppler sound” of a Leslie speaker, in order to generate an atmospheric effect. The strongly present and authentic Vibro-Chorus effect can be heard in recordings of artists such as Robin Trower (“Bridge of Sighs”), Jimi Hendrix (“Machine Gun”) and Pink Floyd (“Breathe”). 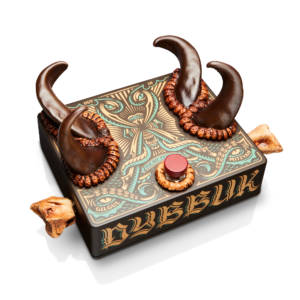 As you may probably know, Dr. No is focussing on analog effects exclusively . The DYBBUK is no exception to that rule, and as always, and without making any concessions, completely handcrafted. There are many cheap and often digital vibes around out there these days, but nothing beats the real deal!  And this ‘real deal’ can only be accomplished by using the exact right components and parts, which these days prove to be more and more difficult to come by, unfortunately. So, a huge amount of Dr.No’s blood, sweat, and tears went into finding and acquiring just the right materials!

Fun fact:  In psychological literature, the DYBBUK has been described as a hysterical syndrome. There remains no doubt, that during the four years of DYBBUK’s creation, Dr.No must have been suffering from the condition by the very same name.

So now, finally, the time has come for this brand new Dr.No Effects creation to be released onto its audience! Get possessed by DYBBUK! 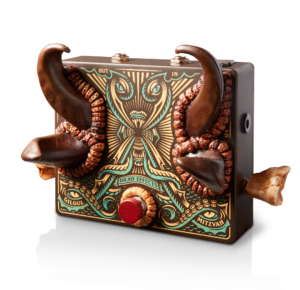 The DYBBUK operates on 9v and requires a minimum safe working current draw amperage of 50/100mA for optimal operation. The power supply input is a standard 2.1mm with a negative tip and a positive sleeve. As always, we recommend using an isolated balanced power supply. The dimensions of the DYBBUK are LxWXH 20cmx13cmx10cm or 7,87×5,12×3,49inch 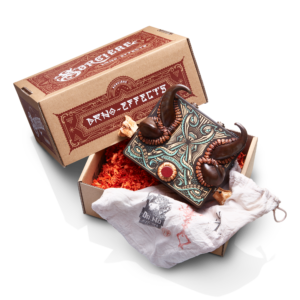 -GILGUL controls the strength of the DYBBUK “Legba Vibe” light, and thus the intensity or presence of the DYBBUK.

-MITZVAH controls the speed of the lamp.

DYBBUK is, as usual, completely handcrafted, component after component, and one by one, by Dr.No.  Concept and elaboration by Dr.No at Dr.No Effects.

The DYBBUK will be built by hand, in a limited edition of 250 pieces, that will be made available and released in a series of 50 at a time. The DYBBUK comes accompanied by a beautifully designed box which is hand silkscreened, an old cotton storage pouch, and the handmade DYBBUK “Legba-Vibe”. All DYBBUK “Legba Vibe’s” are handsigned and numbered by Dr.No, and marked by DYBBUK. 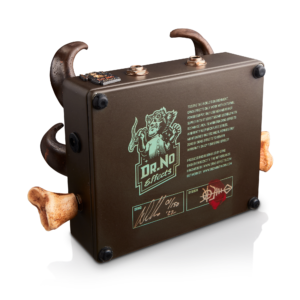 Reservations for availability on the webshop cannot be made, yet they are available for in-advance purchase, to make sure you will receive one if a pre-sale is offered at this labshop. First series is signed and numbered 01 to 50/250, and is available for pre-sale and will ship on…….  The price you have to pay for the DYBBUK includes the advantages of selling your soul to the Devil and worldwide shipping.

Dr. No’s newest creation is SORCIÈRE.
SORCIÈRE is a bigger project than you are used of Dr. No Effects.
The SORCIÈRE project is to connect magic with music and creating music.
Like every Dr. No Effects creation, each one has a story to tell.

SORCIÈRE will exist of multiple releases in 3 phases with various builds:
First build is the NecroFuzzIcon (Vintage Style Fuzz)
Second build is the Djinn (A collaboration with Alain Johannes) Get the Djinn here
Final part is the DYBBUK a vintage style UniVibe with light bulb.
All together will finally complete a spell and a ritual that will come together in a true collectors item.

If you subscribed to the Newsletter, you will receive a personal letter in your mail to collect and purchase one of that time released series at www.DrNo-Effects.com

If you have followed Dr. No Effects SORCIÈRE from the start, you know that this project started more than 3 years ago. During this time, Dr. No developed several Guitar Effects for SORCIÈRE. The First one is the NecroFuzzIcon. The NecroFuzzicon is a 3 transistor Fuzz with two knobs. “Fenrir (son of Loki, the God of deception)represents the Fuzz, Voval (or Vual) (mighty duke from Hell), represents Volume on the NecroFuzzIcon and his Demons.  The absolute holy grail of analog vintage fuzz devices. Similar and inspired on the Fuzzes touched and played by the Gods of rock that sold their soul to the Devil. Fully build with old and NOS essential components to create the true Fuzz tones. Dr. No did not save expense nor effort to create this Fuzz, and will definitely be the Holy Grail of his Fuzz collection, as you soon will discover yourself. Playing the NecroFuzzIcon will bring you in connection with the spirits and help you create and feel inspired to create. But you also have to sell your soul to the Devil first and submit to the almighty SORCIÈRE. In addition the new Necrofuzzicon II has a two way mini toggle switch that generates a two option fuzz, smooth and gritty. The Necrofuzzicon Book and Necrofuzzicon II have a build in noise filter circuit to limit noise.

PLEASE NOTE! Every Dr. No Effect is build by hand, no mass hand production stock is made in advance, but will release and will be available in small series of 50 each time. If you missed out on a series or batch, you automatically receive a mail when a next series are build and released. 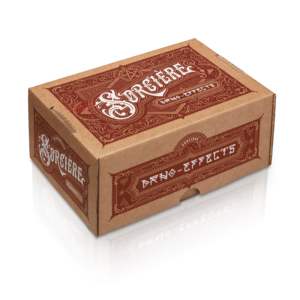 This comes with a limited Edition SORCIÈRE T-shirt, during the order proces you can fill in your t-shirt size. 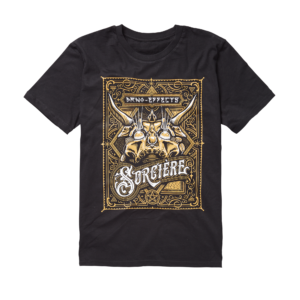