Dr. No Effects landed in JAPAN!!!

Very proud to announce that we have opened a new location to distribute our handmade Boutique collection in Japan. www.DrNo-Effects-JP.com 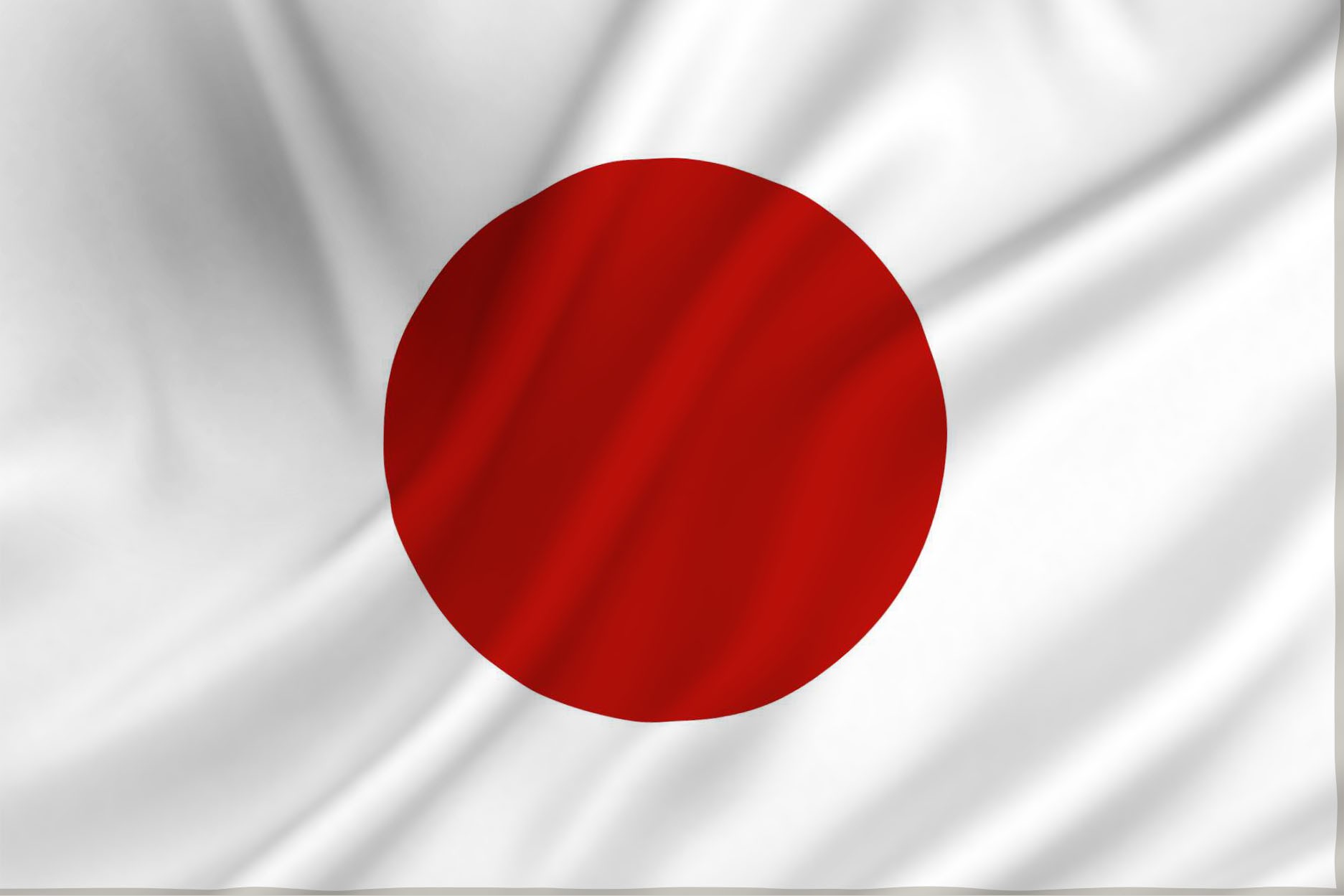 Due to many requests, the SKULLFUZZ is now available in a “tour/pedalboard friendly” housing.

The SKULLFUZZ internal circuit remains the same as in the other two versions of the SKULLFUZZ (Human Skull versions and the Art SkullFuzz). 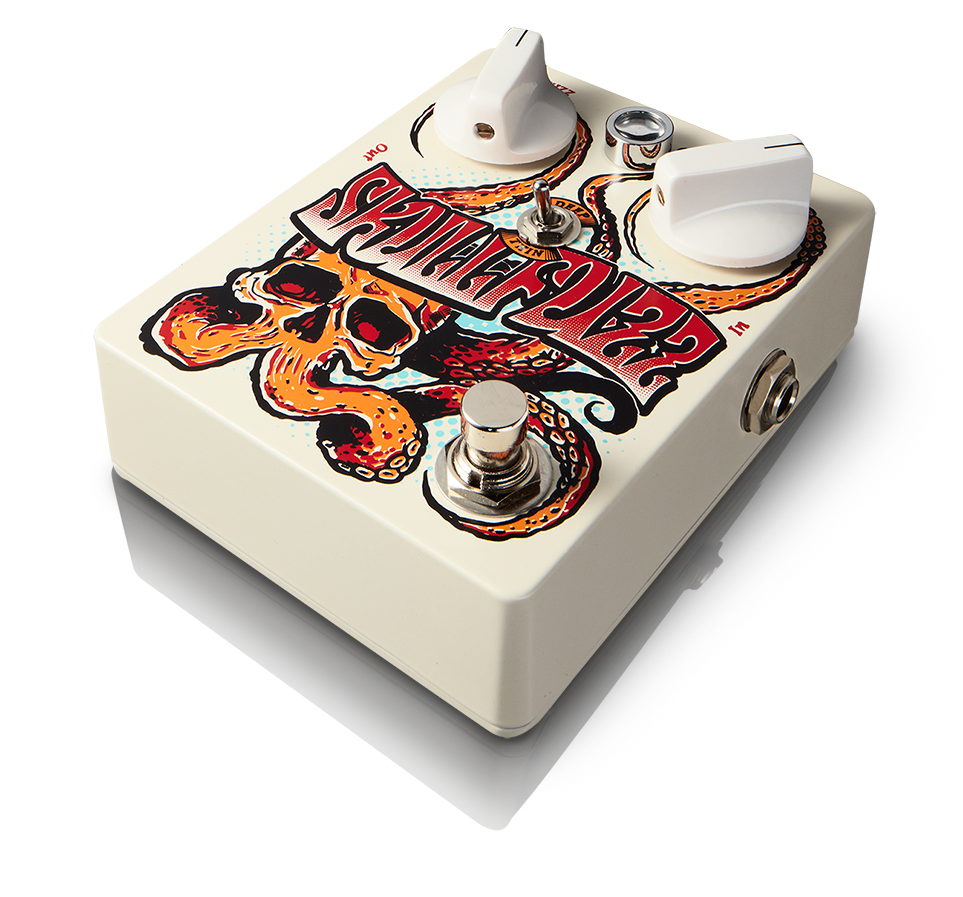 The two eye balls are now replaced by two daily knobs that have the function “Volume” & ” Fuzz”. The mini toggle switch has two ways to change the character of the Fuzz.

Imagine Incredible Hell noise caused by the Devil sharpening  his trident on a huge steam powered hone, rocketing heavy glowing metal shards that descend on a scorched landscape littered with skulls, a dark world where millions of moaning souls wander and scream of unsustainable Hell pain…

This is a summary of how the Skull Fuzz sounds. It can’t get more heavy  than this. 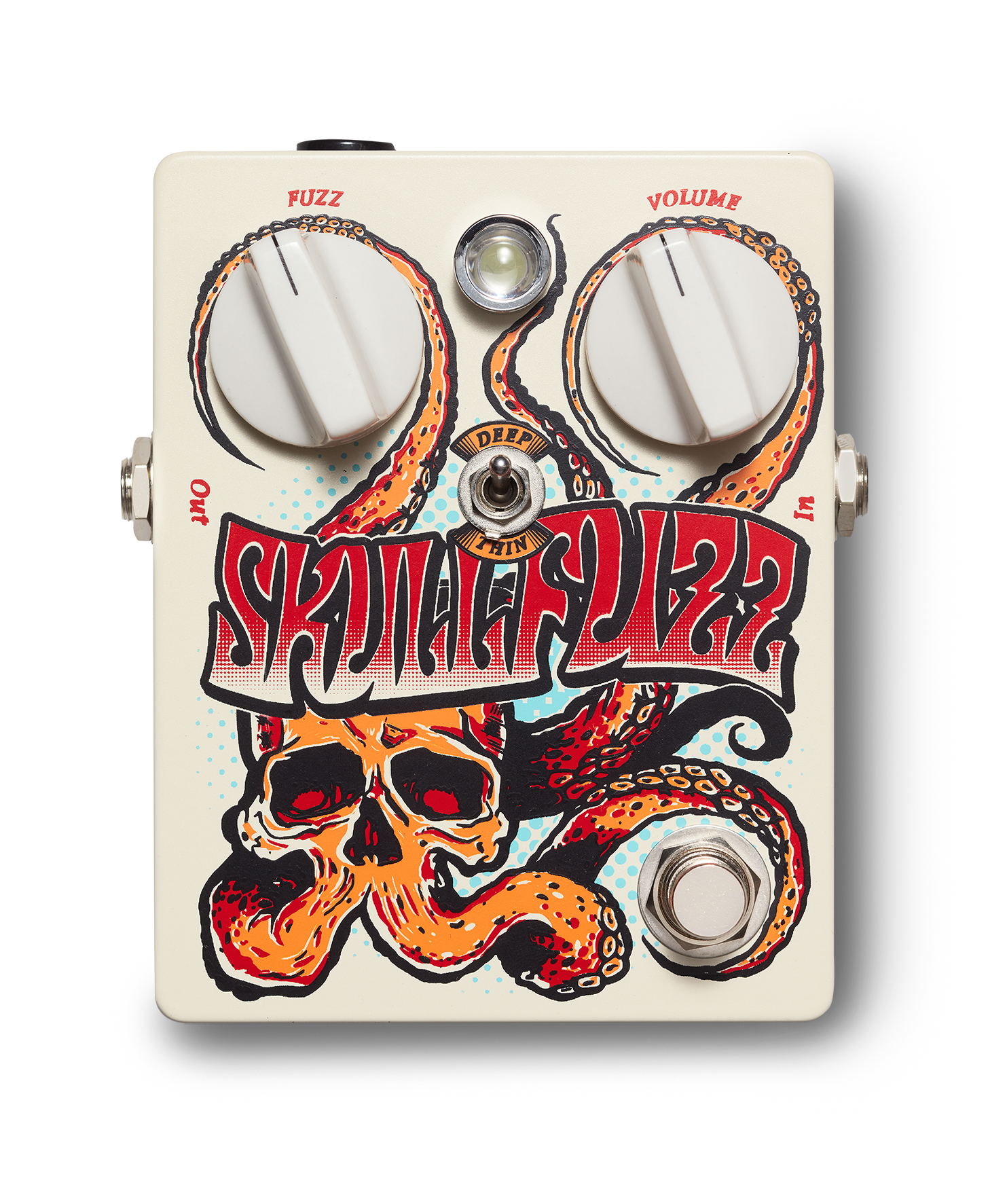 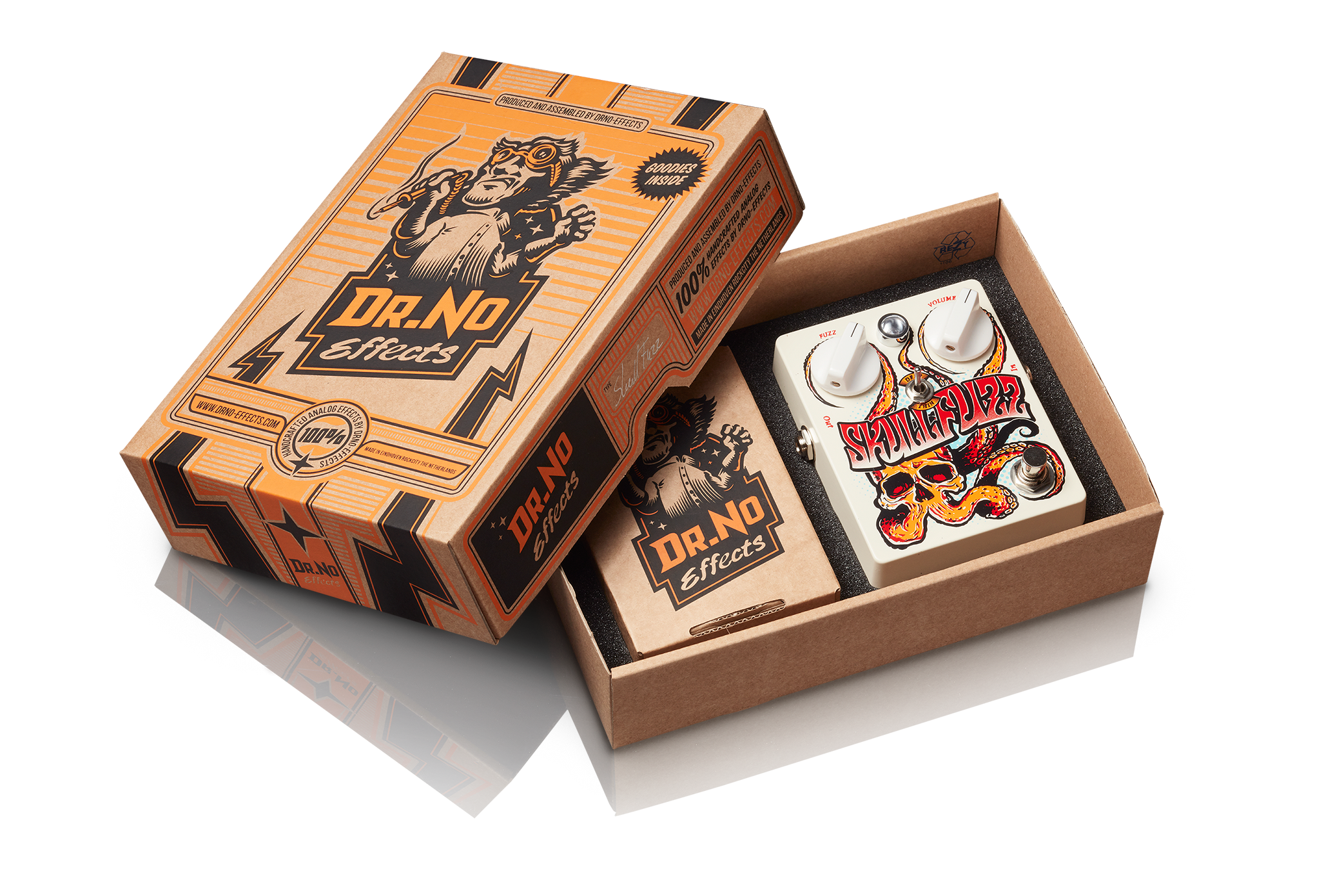 These SKULLFUZZ has a very complex circuit as brain, two daily knobs as Fuzz, Volume knob. The little switch on the side creates a short circuit in the brain for a variation in Fuzz. These unique SkullFuzzes come with custom handmade silkscreen box protection cloth and are available in limited numbered series.

Like you are used to all Dr. No Effects, the SKULLFUZZ is fully made by hand.

The Collaboration between Troy van Leeuwen and Dr. No started after a gig in Amsterdam, were Troy van Leeuwen was playing with Iggy Pop’s Post Pop Depression in may 2016. Troy van Leeuwen, (known from the Queens of the Stone Age, Failure, Sweethead, and his recently formed band Gone is Gone), asked Dr. No if he would be interested in doing a project with him.

Totally unprepared for this question, but as a great fan, honoured by the request, Dr. No leaves the venue and after missing his last train back, and so a long night stay at the train station, he returned to his laboratory to immediately start to outline the ideas TVL had put in his head.

It wasn’t an easy job to evolve in previous designs and sonic concept and take this to a next level as well as to capture the artist in question’s DNA and put this all in a guitar pedal.

After a long search and a few prototypes, Dr. No came to the conclusion that Troy’s wish list wasn’t able to fit in one pedal. Soon the idea came to create the whole enquired spectrum of unorthodox tones, in two enclosures and two different concepts. To be honest the signature QOTSA was a guide line as Troy van Leeuwen told Dr. No some of his sonic secrets to capture in this project.

So, not one but two pedals for this connoisseur were going to be developed.
First up is the Octavia ( not to be mistaken by an Octaver), if you listened to Jimi Hendrix and his solo at the end of “Who Knows” in “Band Of Gypsys” as well as many QOTSA riffs and songs know what an Octavia is. This Octavia is made with two functions. A “Blameshifter” (inside QOTSA joke) switch to set the gain of the Octavia, getting a nasty to sweet Fuzz tone, and a overall Volume knob.

The Octavia works best when put first is a pedal chain, try to work with guitar tone knob, when dailed back, magic octavia tones will come out better, especially from 12th fret and up.

The on/off light is  a custom made anatomical correct tiny Heart, on a bottom plate of real leaf gold. 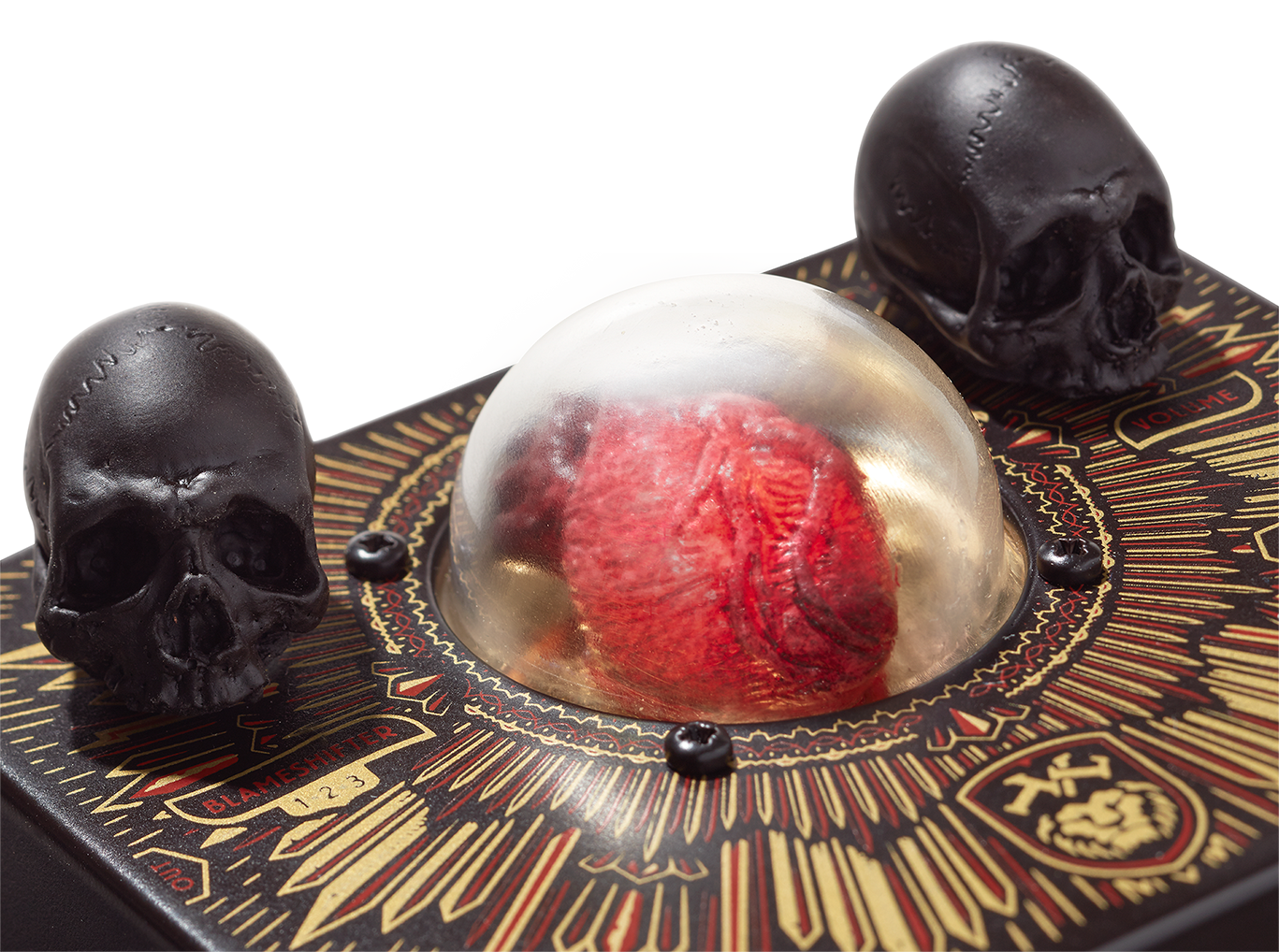 The RAVEN completes the serie, that together with the TVL Octavia, that has been developed over the past nine months in collaboration with Queens of the Stone Age member Troy van Leeuwen. 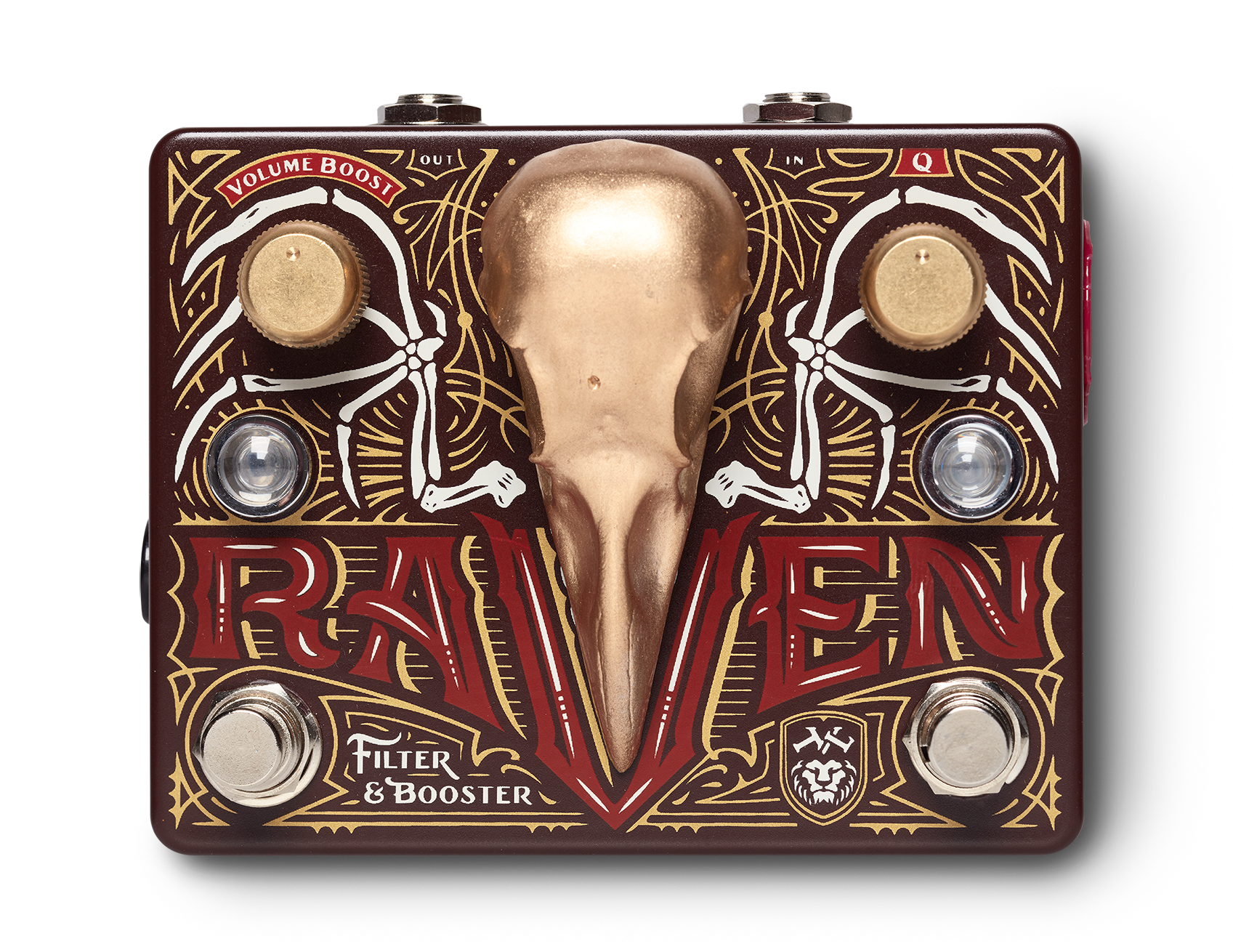 The RAVEN contains a filter and booster effect that can work separately as well as together. 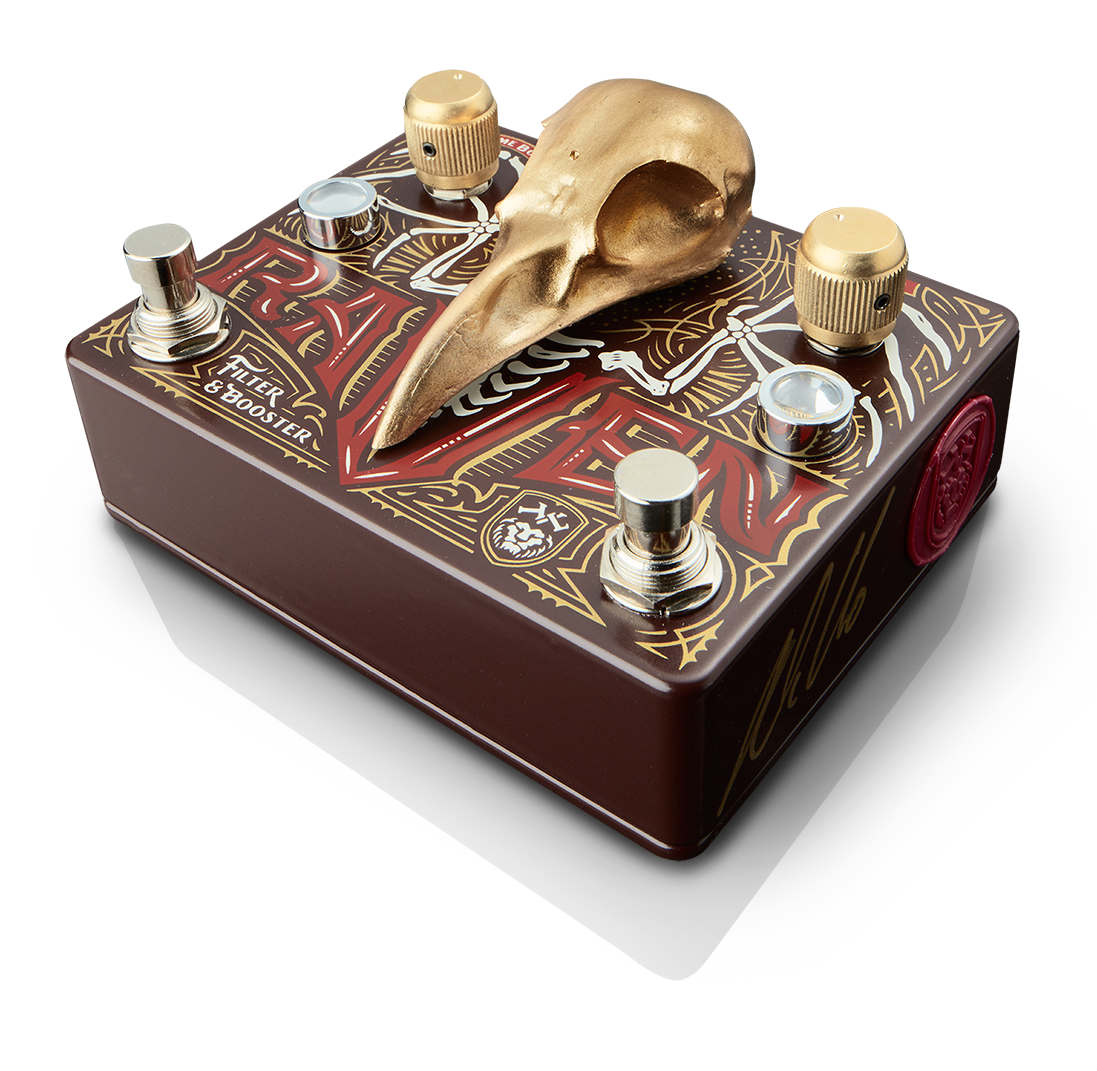 A special “TVL” Crest is designed and added to the cosmetic design on both pedals top design as well as used on the wax stamp on the front side of the pedal.

The TVL RAVEN and Octavia are used on the new QOTSA record “VILLAINS” that will be released soon.

The complete design and techniques are fully handmade and feature only custom made elements especially created for this “TVL” signature collaboration effects.

Because this particular pedal consumes a lot of time and work in custom made elements to build, only a few per month will be available at this labshop and listed dealers.